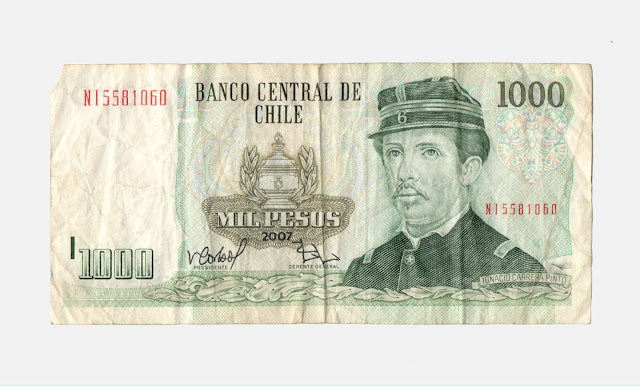 Today one U.S. dollar equals 484 Chilean pesos and of course exchange rates fluctuate, so check online before your trip to Chile – I like www.xe.com. For those of you out there like me, quick math has never been my thing (especially when in a foreign language!) so the following is a little system I’ve come up:

In Spanish, the 1000 pesos bill above is pronounced un mil pesos (even more confusing because it sounds like one million which is actually un millón). Chileans get a little tired of pronouncing the thousands too and tend to chop of the three zeros when talking about their currency, often times using the slang word luca like we say dollar. So un mil pesos becomes una luca which is roughly equivalent to two U.S. dollars. Another common bill is 20,000 pesos (veinte mil pesos) or veinte luca. To figure out how much this is in U.S. dollars I drop the three zeros to get twenty, and then double it, to get about $40.

Here you’ll find a couple of common Qs & As about money matters in Chile. Do you have any others? Ask away in the comments section below.

What’s the best way to get money and pay for things while in Chile?

For many people, the most economical way to get money while traveling in Chile is to use local ATMs. They distribute local Chilean pesos, use the most current exchange rate, and don’t charge a percentage. However the ATM will charge an international ATM fee (usually $5 USD or under), but many banks have programs where they will refund the charges. Bring two cash cards if you can. Credit cards are often accepted at nice restaurants and shops. Cabs and markets may accept U.S. dollars, but we recommend only having greenbacks as backup funds.

How much should I tip while on my trip?

The recommendation for private guides is between $5-10 USD per full day of guiding per person, $2-4 USD for private drivers per full day per person. This is simply a guideline and it is Knowmad’s hope that you use it only as a framework and tip appropriate to the level of service you feel you received. Tipping in Chile is seen as a bonus: 10% in restaurants reflects very good service; spare change or small sums are customary for cab drivers and porters.

Our trip was everything we dreamed it would be and more. Your group did a great job everywhere we went.  We especially loved our guide Paula, and Explora was top notch too. All perfect.